1. Does a copyright arise when an image is generated using automatic image generation AI?

This point of contention will become problematic in the following cases.

Autogenerated images will be used by any users without any limitations of use, in principle.

(1) In what cases, will a copyright arise?

So, as I think you will soon understand, the big question is where to draw the line between “created by humans” and “created completely autonomously by the use of AI, without the involvement of any human in the creation”.

In short, it is a question of whether a human merely used AI as a tool or whether it can be said that [the creation] was generated completely autonomously by AI. However, in the discussion in Japan, this point is determined by whether a human had an “intent of creation” or made a“creative contribution”.2“Report of New Information Goods Review Subcommittee” (March 2017, New Information Goods Review Subcommittee of the Verification, Evaluation and Planning Committee, Intellectual Property Strategy Headquarters), Page 35

Since an “intent of creation” usually exists, it seems that copyrightability is determined by “creative contribution”, or to put it more crudely, “whether humans gave specific, detailed instruction for the use of the AI”.

Conversely, this means that no copyright will arise if humans merely give only simple instructions, no matter how original or how wonderful the generated images are.

In the case of “text to image” AI, such as Midjourney and Stable Diffusion, since text(prompts) are entered to generate images, input text is the key.

In a pattern where you first input a short text (prompt) and a wonderful image emerges all in one shot, there is no creative contribution, thereby making it unlikely that a copyright will arise(Pattern 1).

On the other hand, as various people have said, and even I have dabbled with it a bit, “in Midjourney, there is definitely a trick for input text capable of generating good images”. Good input text definitely is a “secret spell”!

Accordingly, if a lengthy, detailed prompt is input to generate an image, there is a creative contribution, which makes the likelihood of a copyright arising for such image higher (Pattern 2). 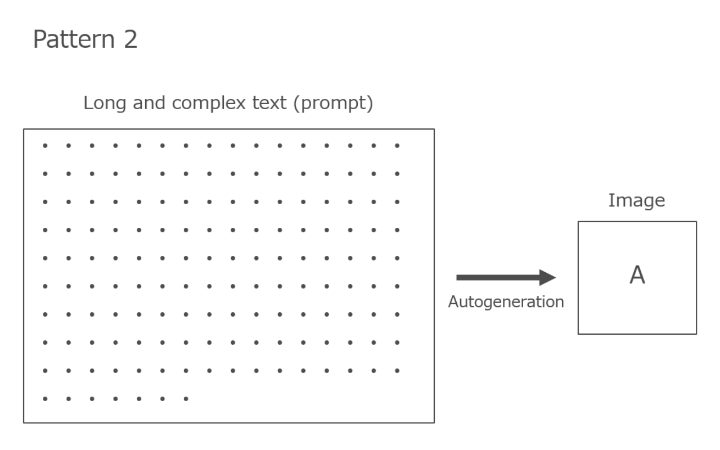 In addition, in general, it is rarely the case that “the desired image can be generated with the initial text(prompt)” as in Pattern 1; rather, multiple attempts must be made to find the length and component of the text(prompt) itself (Pattern 3), and the same text (prompt) is repeatedly input to generate numerous images, from which the act of choosing the desired image takes place (Pattern 4). Thus, I believe that “the act of a human choosing the desired image from among numerous works autogenerated by AI” may well fall under the category of “creative contribution”. 3Koji Okumura, “Does Copyright Protect AI-generated Content?” (The Journal of Institute of Electronics, Information and Communication Engineers, Vol. 102, No. 3). Okumura states on page 256 that in the case where an AI-powered word processor presented several variations of text for a single line of text written by a writer, if the writer selects and chooses among these variations in a way that shows his/her individuality based on his/her own thoughts and feelings, instead of choosing them randomly, then the writer is considered to have made a creative contribution. 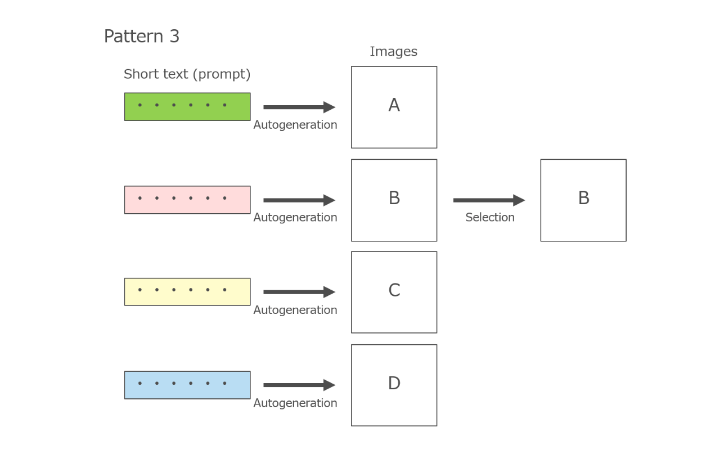 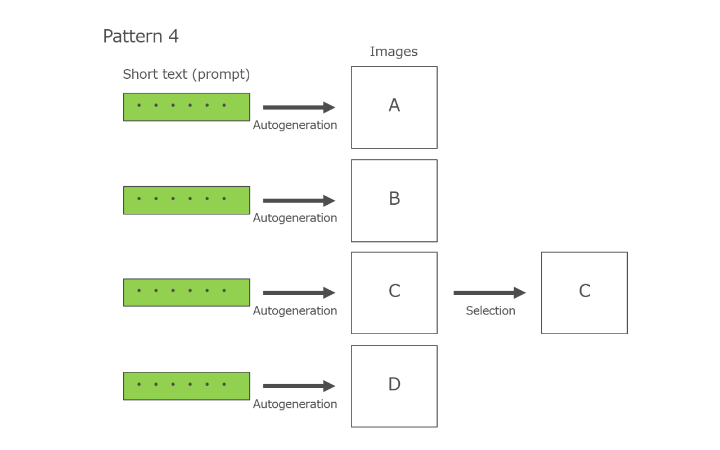 Further, as a matter of course, if the image autogenerated by AI is further processed by humans, where such processing includes creative expression, a copyright will arise for the resulting finished work (Pattern 5).

If you consider it in this light, at least when a professional illustrator generates and processes an image through trial and error using image generation AI, a “creative contribution” is generally recognized, and it is likely that a copyright will arise for such image.

However, since copyrights do not arise in cases such as Pattern 1 or “images not chosen by humans” in Pattern 2 and Pattern 3, I think that the issue of whether AI products are copyrightable will still remain.

On a different note, since creativity is not required for trademarks, I believe that trademark applications can be made and trademarks registered, even for trademarks where there is no creative contribution from humans. Just imagine that a large number of applications are filed for AI-generated trademarks! I think that would presage the onset of further contention.