There are two problems below pertaining to this point.

(1) In the first place, is it possible to contractually limit acts that are specified as “the acts that can be performed without the approval of the copyright holder” under the Copyright Act?

(2) Assuming that (1) is possible, under what circumstances can it be said that a contract has been formed?

(1) In the first place, is it possible to contractually limit acts that are specified as “the acts that can be performed without the approval of the copyright holder” under the Copyright Act?

As explained previously, the Japanese Copyright Act contains a provision which “in principle, makes it possible to use copyrighted works without the copyright holder’s approval if [such use] is for developing AI software”(Article 30-4, Item (ii)), and under this Article 30-4, it is possible to use copyrighted works regardless of whether [such use] is for commercial or non-commercial purposes.

However, when there is a representation that “the use of the illustration that I drew for AI learning is prohibited”, there is an inconsistency with Article 30-4, which gives rise to the question of whether such an agreement can even be made in the first place.

This point is easier to understand if you understand the structure of the Copyright Act.

Here is what it looks like when it is shown in a diagram. 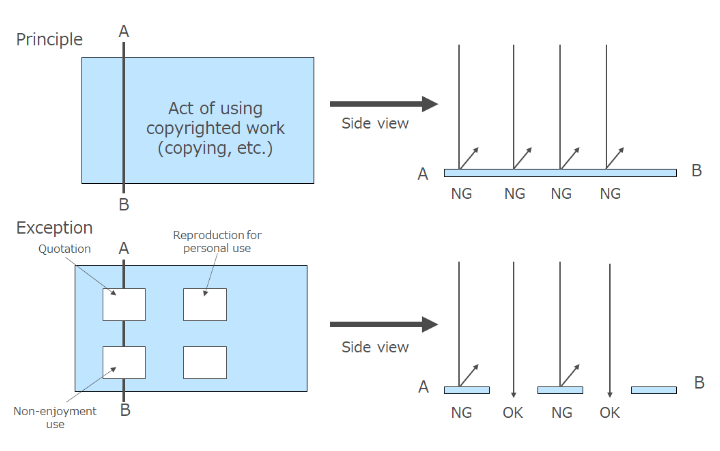 Since Article 30-4 of the Copyright Act, which I have been explaining, is one type of provision that limits right, it is essentially a gap in the law.

On the other hand, if a representation to the effect that “the use of the illustration that I drew for AI learning is prohibited” is made, figuratively speaking, the question arises as to “whether or not it is possible to fill the gap created by the provision limiting rights by covering it over with a contract.” (This issue is known as the “override of the Copyright Act”.)

Override with a contract

In previous discussions, when considering the validity of override provisions, the concept that provisions limiting rights are mandatory provisions, thereby uniformly rendering all contracts in violation invalid, has not been taken into account.

It seems that in many cases it is considered necessary to determine the validity of the contract on a case-by-case basis by comprehensively considering various factors such as the purpose of the rights limitation provision (“Report on the Results of the Examination by the Working Team on Contracting and Usage of the Legal Subcommittee, Copyright Committee of the Council for Cultural Affairs” (July 2005), “Report of the Council for Cultural Affairs Copyright Committee” (January 2007), p. 18, and “Report of the Working Team on General Rules on the Limitations of Rights” (January2010), p. 47).

Based on that premise, there is also an opinion that emphasizes the legislative intent of Article 30-4 of the Copyright Act, according to which Article 30-4 is regulated as a mandatory provision, thereby uniformly invalidating any contracts to the contrary.1Masayuki Matsuda, “Paradigm Shift with Flexible Rights Limitation Provisions; Practical Considerations; Guidelines for Use of Copyrighted Works in Book Search Services”, Copyright No. 718/Vol. 60), Page 22

On the other hand, page 55 of Appendix 2 of the Report (“Report of the Study Group on Issues related to the New Intellectual Property System”) that I mentioned early states that, rather than interpreting Article 30-4 of the Copyright Act as a mandatory provision, among the acts of use whose rights are limited under Article 30-4 of the Copyright Act, it focuses particularly on acts of use for AI learning. It concluded that “although it is necessary to consider various circumstances in discretesituations, it is highly likely that provisions that override limitations on the act of using copyrighted works for AI learning or other purposes will be considered invalid to the extent that they are contrary to public policy.”

This is a fairly detailed description.

Based on this premise, at the very least, contractual provisions that limit acts of use of copyrighted works for AI development would be considered invalid.

(2) Assuming that (1) is possible, under what circumstances can it be said that a contract has been formed?

The question is whether simply representing that “I will prohibit the use of my illustrations for AI training” constituted a “contract” in the first place.

In conclusion, it is likely that the mere fact that such a unilateral representation is made does not necessarily mean that a contract has been formed. This is due to the requirement that the intentions of the parties to the contract need to mutually agree for a contract to be formed.

However, in fact, even if a “contract” is validly formed by causing [the user] to comply with the terms of use, the effect of such contract would be limited. This is because a “contract” is only effective between the parties who entered into it.

For example, suppose that X, the creator of an image, publicly discloses the image which is subject to terms of use that stipulate that “the use of this image for AI learning is prohibited”.

In this case, if Y agrees to such terms of use and acquires such image, Y is bound by the terms of use.

Therefore, if Y uses the image for AI learning in violation of the terms of use, Y will be liable to X for damages due to non-performance.

This is because Z has not agreed to the terms of use and is not bound them.

With respect to this point, the following points of contention are problematic.